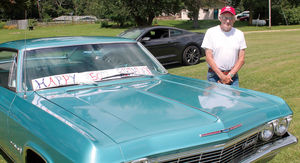 Richard Eith’s 1965 Chevrolet Impala turned 50 – yes, 50 – years old on July 28. And he almost bought another car five decades ago.“I went to buy a Ford (in Janesville) that morning,” said Eith, 80, “and the guy didn’t want to talk to me so I went to the Chevy dealer and he was nice.”He custom ordered it from a Janesville dealership to get the exact color he wanted – a muted blue-green that’s not quite aqua.The Impala, which cost him $2.980 (he could have paid an extra $29 for power steering), was just the start of his car collection.Eith, a McFarland resident, has nearly a dozen classic cars that are stored in a garage on his property. It’s a tight squeeze but all of them fit. There are cars from the 1960s parked next to a Jeep from the late 1970s and a late 1980s Lebaron.After the Impala, Eith started to expand his collection. A co-worker sold Eith a 1972 Pontiac Catalina. He bought the car in 1978 because he liked the car’s lines. “I spent a lot of money on it but it’s pretty nice.” Eith had someone put in a new exhaust system and suspension.